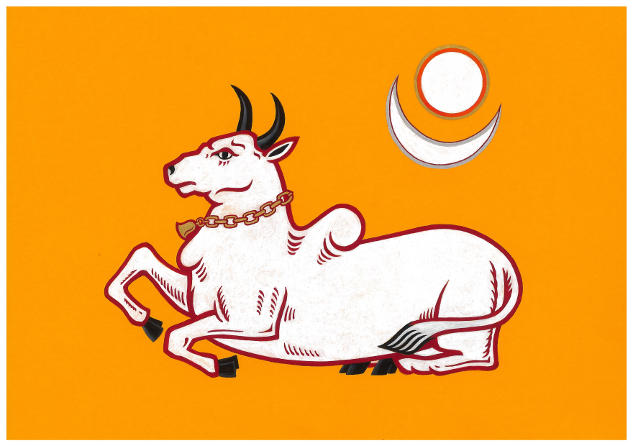 The Royal Flag of the Arya Cakravartti, Kings of Jaffna, dates back to the 13th century. The Royal Flag was readopted in 2005. Tradition clams that the victorious Bull (Nandi) flag was granted by Sri Rama.

In the centre of the Royal Flag is the victorious Bull (Nandi) couchant facing left and with its right foreleg raised. It has a hump and a large dewlap and black horns which are uncut. The Nandi with a Magenta outline is adorned with a golden chain around its neck with a golden bell attached to it. The Bull surmounted by a Crescent enclosing the Sun on a Saffron background.

The victorious Bull (Nandi) flag is a symbol of pride of the Kingdom of Jaffna. Today, as we fly the Royal Flag we can fly it with an understanding and appreciation of the rich cultural heritage of the Kingdom. 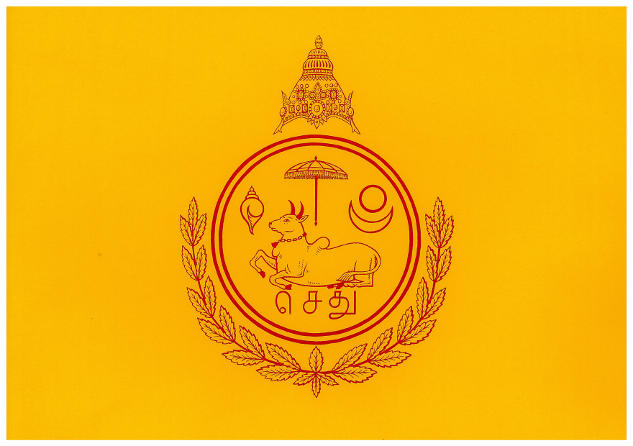 In 2005, The Raja of Jaffna adopted a Personal Standard, which is quit separate from the Royal Flag. According to Hindu mythology, for Thursday the colour of this day is Yellow and the day of The Raja’s birth and his lucky colour. In the centre of the Personal Flag the Royal Coat of Arms is placed, with a Maroon outline on a Golden Yellow background. The Personal Flag is personal to him alone and can be flown by no one other than The Raja of Jaffna.

The Royal Flag and the Royal Standard Copyrights

The Royal Flag is reserved for the Head of the Royal Family and other members of the Royal Family of Jaffna. The Personal Flag is reserved for the Raja of Jaffna. The Royal Flag, the Personal Flag and the Royal Symbols may not be reproduced, copied, published or used without the prior permission of the copyright holder. Any misuse of these items is deemed tantamount to abuse and considered infringing the Copyrights Act.

Request for permission to publish or to use the Royal Flag, you will need to obtain permission. For further information please contact us.